One of the most common question types for IELTS academic writing task 1 is a line graph.

A line graph is used to show how something has changed over time, and you will typically have a line graph that compares 4-6 different things.

If you practise writing line graph questions using the following strategy, you should have no problem writing a good response quickly in the IELTS exam.

The first thing you need to do is see what is going on. It can be helpful to take a minute before you write anything and just try to understand the data.

In particular you need to know:

The introduction for any academic task 1 can be made up of:

In other words, paraphrasing means to take an idea and express it in your own words.

In every task one, you are given a description of the chart(s) or diagram(s) that follow. This looks something like this:

The graph below shows average Carbon Dioxide (CO2) emissions per person in the United Kingdom, Sweden, Italy and Portugal between 1967 and 2007.

We need to take the ideas in this sentence and put it into our own words:

The line graph provided compares the mean amount of carbon dioxide emitted per capita in four European countries over a 40 year period.

Note the different ways I have used to paraphrase the original sentence:

This is a bit trickier than paraphrasing. The way I do this however, is to consider the main thing that is being measured over the period in total.

So for the same example as we have just paraphrased, we know that the graph is measuring the average level of individual Carbon Dioxide emissions. What we want to know then is whether individuals are producing more, less or about the same amount of carbon dioxide at the end of the period (2007), as in the beginning of the period (1967).

Have a look at the graph. What do you think? 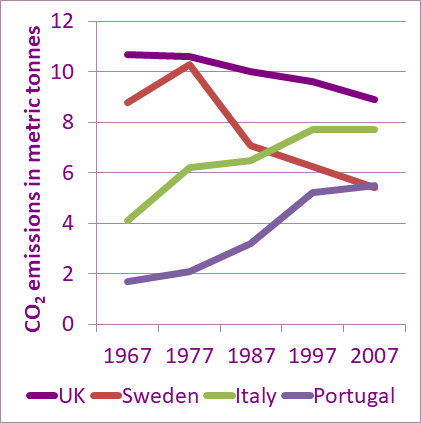 Hopefully, you would agree that it is about the same. We could therefore use this as our overall trend. However, this is only going to get us a simple sentence, and we really want a complex sentence to boost our grammar score.

A great word to use here therefore is despite. Which sentence with despite best describes the graph above:

In the body of the IELTS academic writing task 1 is where you describe the data in the line graph. This means you need to describe how each line changed.

This will largely depend on the actual graph that you have and it is useful to look at as many examples as you can before the exam. The following principles should help you.

This is something I often see my IELTS students do. They write, for example, the blue line increased from 2 to 6. The blue line refers to something (in the example above it is the average CO2 emissions of people in Portugal); make sure you say what it is!

Divide the Line into Phases

We don’t need to give this level of detail. It will get you past 150 words (and probably to 300 words), but the grammar and cohesion will probably be very poor. Instead look at where the lines change. For the UK, I would write:

The UK, which started the period with the highest average at around 10.8 tonnes, decreased steadily throughout the period reaching a low of just under 9 tonnes in 2007.

The above sentence is complex with 3 different clauses and conveys the main information.

After an initial climb from approximately 8.8 to 10.3 tonnes in the decade before 1977, emissions in Sweden dropped sharply in the following decade before decreasing more gradually. By 2007, Swedish emissions had fallen to just over 5.5 tonnes, making their citizens the lowest carbon dioxide emitters of the four nations.

Write about Similar Trends Together

If you have a lot of information represented on the graph, it will become necessary to talk about similar trends together. We can see in the example that Italy and Portugal have a similar shape graph, with an increase in the first 3 decades and either a small or no noticeable change in the final decade.

We could therefore describe these together:

Although Portugal and Italy started the period with the lowest average emissions (approximately 2 and 4 tonnes respectively), these figures rose rapidly up until 1997. While Italy then remained level at roughly 7.8 tonnes, Portuguese emissions grew at a steadier pace reaching more than 5.6 tonnes and overtaking Sweden in the process.

In the conclusion, I like to write what I call a key comparison. This ties the task 1 report together by communicating the most important changes in the diagram. This sentence basically says how the different things that are being compared have changed places.

For the above graph, I would want to mention:

It is better to avoid phrases like “first place” and “last place” as this isn’t really a competition. Instead you could write this as:

At the end of the period, the UK’s average carbon dioxide emissions still outnumbered the other countries, while Sweden’s had become the lowest.

One thing that is tempting to do is to add in an opinion or rationale to the conclusion. For example:

You should NOT do this. You should only use information you see in the graph, otherwise you will hurt your Task Achievement score.

The line graph above is based on an IELTS question that appears in IELTS 11 Academic. The full book can be purchased here.

Paper based IELTS or Computer based: How to decide?

Paper-based IELTS or Computer-based? Join my IELTS telegram channel Click here Introduction As you are likely aware, the IELTS exam exists as both a paper-based and computer-based exam. This means that you have a choice Read more…

IELTS Life Skills B1 Guide Join my IELTS telegram channel Click here Introduction The first questions you are going to be asked are: What’s your name? How do you spell it? What can I call Read more…